GeoCat Bridge is an extension for ArcGIS Desktop and runs within ArcMap. This blogpost aims to explain what GeoCat Bridge does in more detail. In short; GeoCat Bridge enables you to publish the layers from a ArcMap map project (MXD) to GeoServer or MapServer as OGC Web Services (WMS/WFS/WCS) and publish the metadata of layers to GeoNetwork catalog.

So what does this mean? Let’s say you have a map project saved in ArcMap and you want to convert this map project to GeoServer, so you can view the map through the WMS service of your GeoServer. If you want to do this manually, you will have to:

If you are using GeoCat Bridge the above steps are taken care of by Bridge, simply by the click of a button. 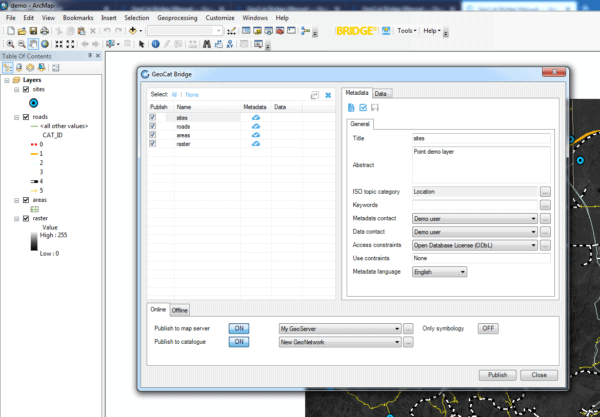 GeoCat Bridge publish window, publish to your map to GeoServer and GeoNetwork with one click of the button

Besides publishing the maps to GeoServer or MapServer, Bridge can also publish the metadata of your datasets to a geospatial catalog, such as GeoNetwork (Bridge also supports generic CSW implementations, such as PyCSW). When publishing metadata to a catalog Bridge will convert the ArcGIS metadata to ISO19139 format and upload it to the catalog. Bridge supports a number of different metadata profiles; generic ISO19139, Dutch Profile version 1.3.1 and INSPIRE.

So Bridge exports the datasets of the layers in the MXD and uploads the exported datasets to the map server (either MapServer of GeoServer). But we still do not know how Bridge does this , because Bridge supports a number of different data publishing scenario’s. Four publishing scenarios are supported by Bridge at the moment, these are explained below.

There are two options to store uploaded datasets on the server:

The default publishing scenario is to upload the datasets over HTTP as files to the server and store the datasets as file on the server. The file format used to upload the files is GeoPackage when this is supported by the GeoServer instance (see the notes in the manual about this), or when this has been enabled for the MapServer connection.

When you publish with direct PostGIS connection, Bridge will export the data and store it directly in the PostGIS database. Raster layers will be published as GeoTIFF in the map server.

When using OracleSpatial as a datasource for your layers in your MXD you can decide to not export the data but to reference the data on your map server instead. The advantage of this approach is that all data stays in the same place, so there are no duplication/synchronization problems. Also publishing the map layers is a lot quicker since no data needs to be processed.

If you have idea’s for new publishing scenarios or features in GeoCat Bridge, feel free to contact us. I you would like to try Bridge, checkout Bridge on our website.