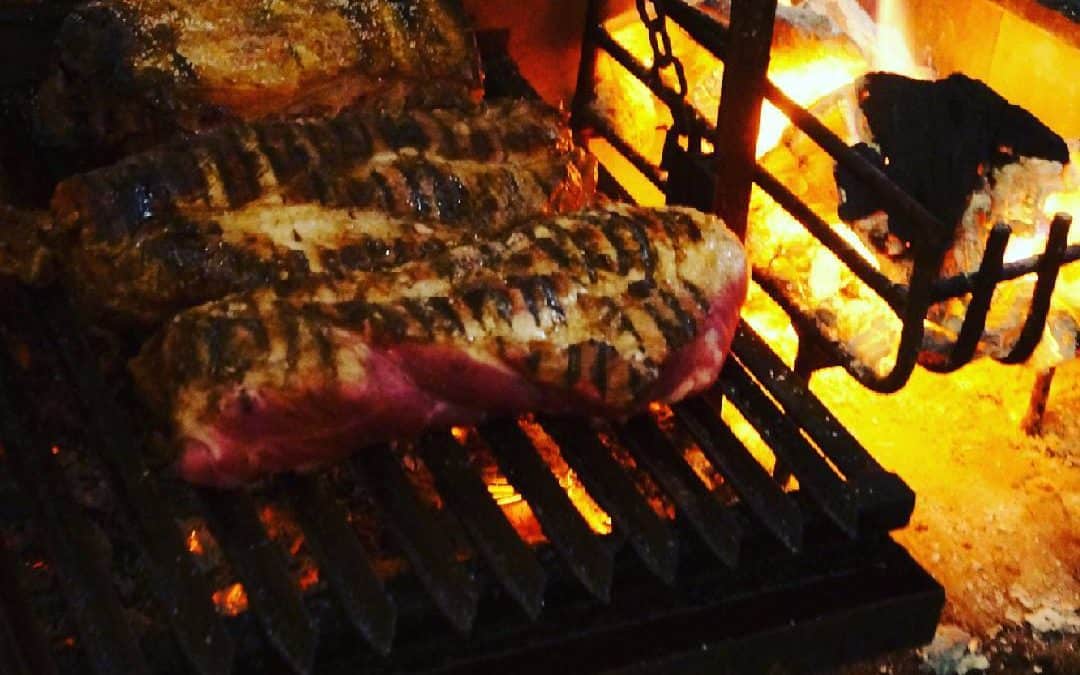 This year I had the privilege to go to the FOSS4G Argentina, which took place on the IGN of Buenos Aires. What can I tell you of Argentina that you don’t already know.

But I didn’t go there only for the meat. We had a lot to share and learn on this conference, unique in South America and probably in America. There were participants from all over the continent, even brasilians who successfully spoke in Spanish.

The week started with a couple of GeoNetwork workshops: a basic and an advanced one. With a very mixed level of assistance, we had basic SDI users and advanced GeoNetwork developers as assistants. It was a very welcome and friendly environment, where we could discuss how to install and customize GeoNetwork for every usecase.

The human quality and technological level was high, as in any event where OsGeo and GeoRestless meet. Variety was also an important part of the conference.

We had visitors from Brasil to teach us how to integrate R and PostGIS to do advanced analysis over spatial data using free software tools.

We meet the open data portal from Argentina. Once more, we found that gubernamental burocracy doesn’t even know which data they have available. An interesting debate started about which one was better for storing data: CKAN or GeoNetwork.

We could also assist to the talk of one of the LeafletJS developers talking about the future not only of the map visualization library, but also about Javascript and browsers in general. Since HTML5, advance on web technologies are going faster, sometimes even colliding with old ideas about how to develop on this kind of platforms.

The argentinian IGN also surprised us with a talk about how to process data with qGIS applied to an ongoing research: how to measure the melt of the Antartic. And, above all, how to measure a location GPS point on a so remote place, where GPS is not trustable?

We had visitors from Ecuador that explained to us the importance of updated and checked data not only for the public administrations, but also that this data is accessible by the citizens to control corruption. The case of Guayaquil, where hundreds of houses where built on zones highly unhealthy looks like a gangster movie with lobbies fighting against the citizens. A perfect warning about the effect that humans have over the environment and how important it is to work with free data and transparency.

Boundless told us about the latest news on GeoGig, the spatial data repository with version control sponsored by LocationTech. No doubt this is one of the projects that we will hear a lot in coming years. They are right now looking for testers to present a stable version.

We were also surprised with a talk that run through all the history of graphic engines in videogames to conclude that IndoorGML is just reinventing the wheel.

The National Geographic Institute of Argentina (IGN) showed us their particular vision about how to adopt free software and data on SDI. One of the ain problems they found when they tried to migrate from closed technologies was the lack of a good web of companies that could support them. Undoubtedly, we redirected them to the provider search engine from OsGeo.

Breaks where very productive to talk to other assistants with the same interests. And the argentinians eat something more than meat: they also have coffee.

From Mexico they told us how they used free tools to locate and analyze social programs that were being run on different parts of the country. This way, once more, we realize that we can fight corruption adding more transparency to the government decisions with a low cost using free software and data.

The key is to empower citizens so they know and can control better the problems in their surroundings.

Of course, I also had to talk about GeoNetwork, its past evolution and its incoming developments.

Georchestra was also on this conference, the french framework that unifies several GIS free technologies (GeoNetwork among them) to offer a simple solution for SDIs.

We also assist to the presentation of the interactive map of Buenos Aires (mapa interactivo de Buenos Aires), created also with free software and based on OpenStreetMap data. Instead of starting a cartography from scratch, they started with OSM and continued updating it, allowing not only full dynamic control over this data from the argentinians, but also that all the work was published on a free license.

As we can understand from this talks, integration of OSM with government data in South America is fundamental, with all the challenges that this arises: keep the official data “stable” and handle inconsistencies on a transparent way to the user, so he doesn’t know that the map he’s using is a mix from different sources.

CartoDB surprised us explaining his bussiness model based on a completely free product. This means: you can install your own version of CartoDB on your server and use it as is.

As a curious note, CartoDB has a policy of not making bussiness with military and polluting companies.

So, we are already waiting for the next FOSS4GAR… once we survive the meat intoxication, of course.